I work in a building that is below street level, right near the railroad tracks.

When I look up I can see the part of the sky and the sides of buildings- some are brick, some glass and buses, I can always see them . I know. Exciting, right?

I call it my Coffin view because if you laid down ( which I wouldn’t advise, so you’d have to imagine it ) it’s the view you would get if you were in a coffin.

One day though, I saw something new what I looked up peeking over the rail at me from the foot of my coffin: 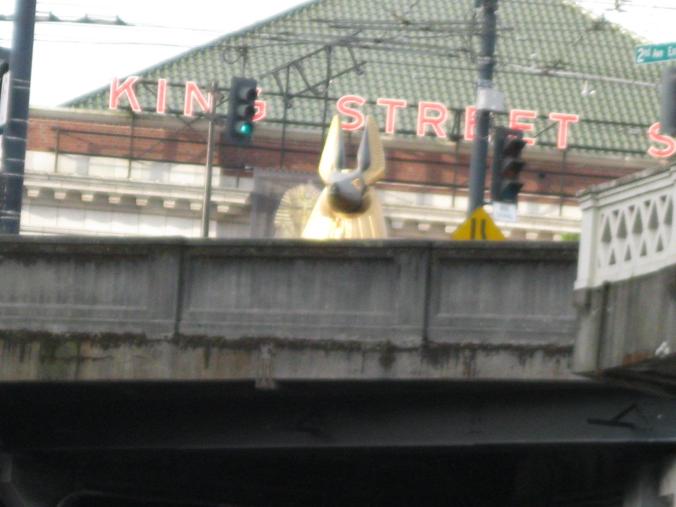 Really? I thought. Am I really seeing this? I  walked up a little closer and looked straight up and in addition to f the usual brick and glass and bus tops – it really  was  there looking down into my coffin.

Anubis- and he was magnificent.

I had no idea what at the time what it took to set up a 26 foot tall 5.5 ton  statue of the God Anubis to the corner of the street that overlooks my Coffin- I have no idea because from my coffin I can’t hear much of what happens on the street above.

I’m guessing if you asked the segment of our former population that now resides underground they would say the same thing.

I spent a lot of time around the statue of the God Anubis during his visit to Seattle. After all, I had learned the art of embalming, I worked below the street where there are the remains of what used to be everywhere I walk and I write about ghosts and those little things that crawl into our dreams at night and turn them into nightmares.

I’m very fond of this particular deity…color you surprised, right? 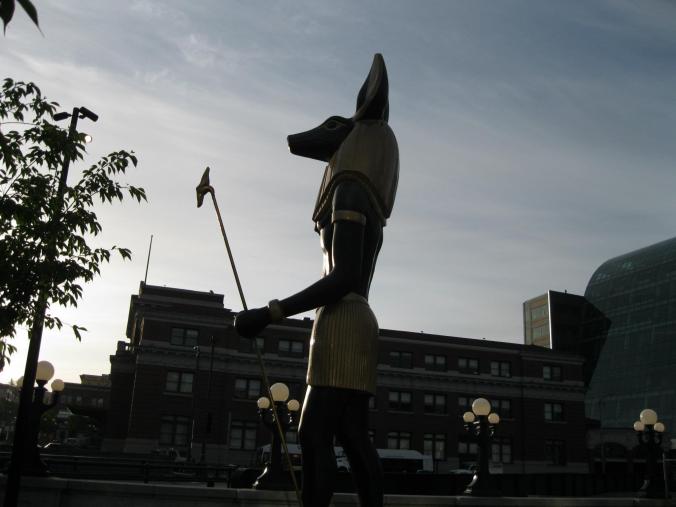 Of all my pictures, I love these the most because of what they represent:

Sometimes when I go outside and look up from my Coffin and my lip sort of does the Elvis lip curl because it’s a pretty uninspiring, bland smelly view but I remember this day and I have the pictures recoding the moment and I actually  hope and think it’s possible that one day  I see something this great again.

HERE is a video of the statue of Anubis being  brought in that was shot by the Seattle Department of Transportation: